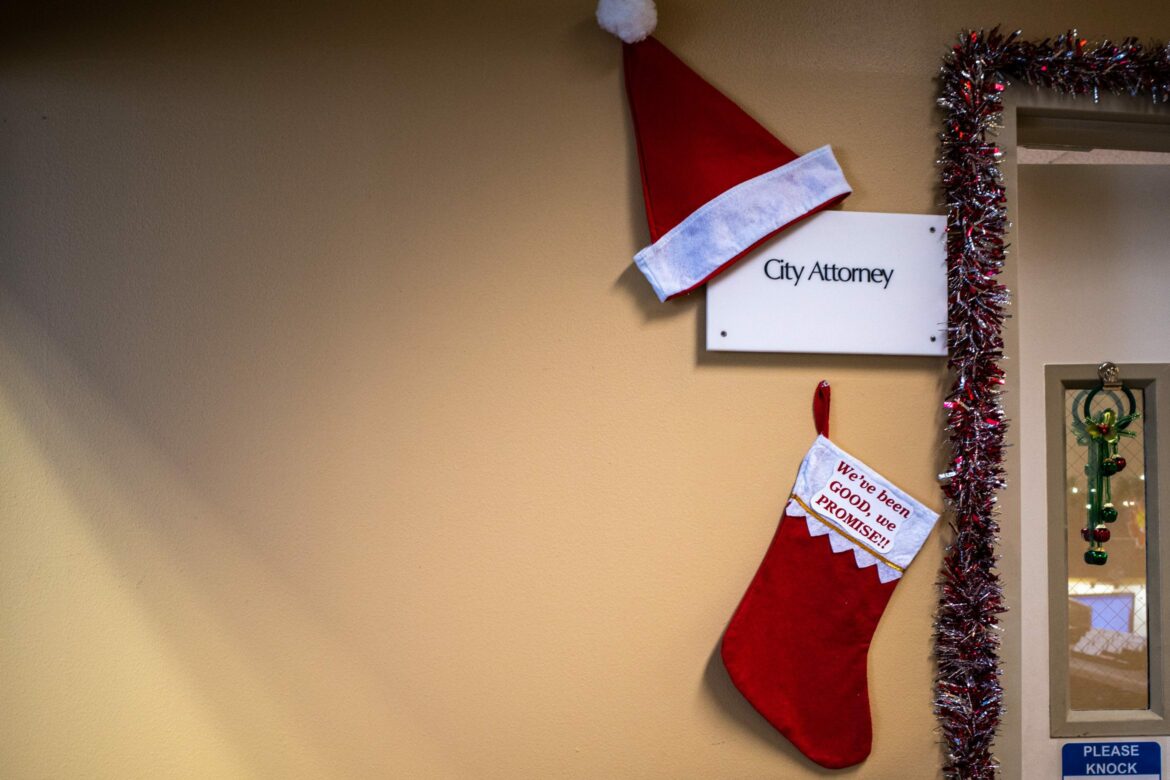 A stocking hanging outside the Vallejo City Attorney’s office on Dec. 21, 2022 reads, “We’ve been GOOD, we PROMISE!!”

The Vallejo City Attorney’s Office has hired a firm specializing in “deep intel” and “counter intel” investigations in an effort to link two anonymous social media accounts to a group of former employees who are suing the city for alleged retaliation, confidential records obtained by Open Vallejo show.

Upstream Intelligence, Inc. was hired in September to “uncover the individuals who created and operate” the accounts, according to a copy of a Sept. 23 consulting agreement signed by Deputy City Attorney Katelyn Knight, who is defending the city in the lawsuit. The Davis-based company, which holds a California private investigator license, includes experts in open-source investigations, “surveillance operatives,” and analysts, according to the firm’s website. It also engages in intelligence collection using drones, device forensics, and cell site analysis.

Upstream Intelligence declined to comment for this article. Knight and a spokesperson for the city did not respond to requests for comment.

The investigation targets three former city employees who worked for then-City Manager Greg Nyhoff when they were fired in April 2020.  Slater Matzke, Joanna Altman, and Will Morat allege in a lawsuit filed last February that they were terminated after raising concerns over Nyhoff’s handling of a multi-billion-dollar land deal and other alleged misconduct. They have faced retaliation ever since, according to the lawsuit. Matzke claims he has received anonymous threats and observed a Vallejo police SUV parked outside his home. All three allege harm to their reputations and careers.

Matzke, Altman and Morat declined to comment for this article.

“A city surveilling people that criticize it is deeply, deeply disturbing,” said Andrea Sorce, who is married to Matzke and serves as the vice chair of the city’s Surveillance Advisory Board. “We advocated for the creation of the advisory board to protect peoples’ rights in exactly these types of situations.”

The records obtained by Open Vallejo do not identify the social media accounts the city seeks to link to its former employees. Pseudonymous accounts have proliferated on social media platforms since Open Vallejo began publishing investigative reporting in 2019. Fueled by a steady stream of public controversies involving the police, city manager, city attorney, and city council, commenters using pseudonyms have engaged in robust discussions that have included sophisticated analyses of police tactics and sharp critiques of public officials.

Public employees have also used the Internet’s anonymity for their ends. In February, the Instagram account “Vallejo PD Burning” began publishing memes ridiculing then-Police Chief Shawny Williams. The account quickly amassed a following that included some of the city’s most violent police officers. Williams, the first Black chief in the department’s history, resigned last month after less than three years in office.

Vallejo’s contract with Upstream Intelligence authorized 10 hours of initial work totaling $2,000, which records show the firm exhausted five days later, and “further work at $250 an hour for further research or costs related to testimony in this case.” The city limited the scope of the investigation to the use of public and publicly-accessible information. It is unclear whether — or how — the city anticipated its investigation would prove that Matzke, Altman and Morat were behind one or both of the anonymous accounts. Open Vallejo has filed a public records request for more information about the investigation.

The right to anonymous political speech has been repeatedly affirmed by the U.S. Supreme Court, which in 1995 characterized it as “an honorable tradition of advocacy and dissent.” The tradition traces back to the creation of the United States, the court noted, when both sides of the debate over whether to ratify the Constitution published their arguments under pseudonyms.

The City of Vallejo, however, has had a complicated history with online commentary, especially by anonymous speakers.  In 2020, Open Vallejo and the Electronic Frontier Foundation threatened to sue the city after an investigation by this newsroom uncovered a pattern of city officials blocking and removing social media posts by residents, which led to the creation of a municipal social media policy. Then, in August, the city dropped a requirement that public records requesters identify themselves as a condition of using its online records request portal after the nonprofit First Amendment Coalition sent a letter criticizing the practice. (FAC’s Executive Director David Snyder is a member of Open Vallejo’s advisory board.)

Vallejo’s city charter also requires commenters to state their name and address before speaking at council meetings, a requirement that likely violates state law, according to a FAC analysis.) It is one of several city policies that critics say chill public participation in local government. These include a short-lived change to the council’s public speaker policy in 2021, which the city abandoned following warnings about its legality from the ACLU.

But it was Lord Sock Puppeton, not the ACLU, who fired the first volley on Aug. 21 of that year.

“Isn’t there a little thing called the First Amendment?” they tweeted.