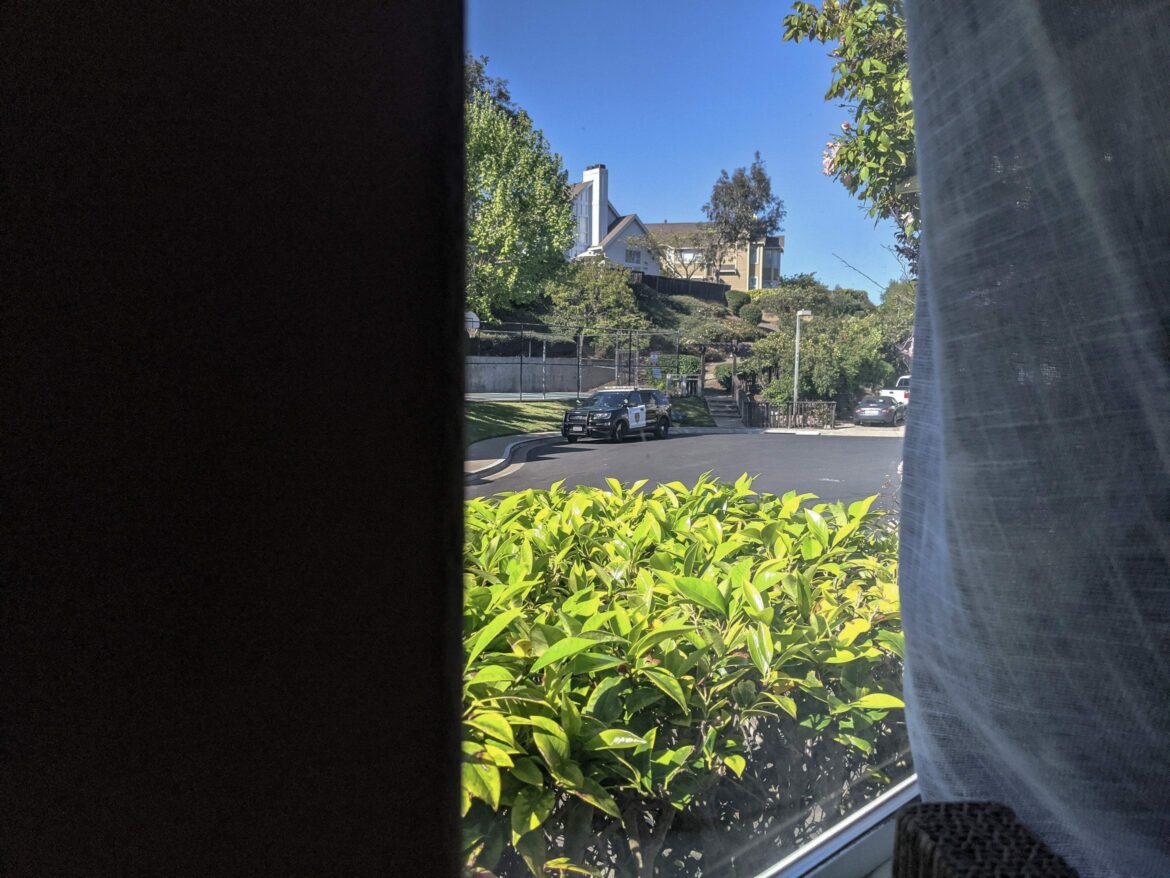 Slater Matzke, a former senior advisor to Vallejo City Manager Greg Nyhoff, alleges in a lawsuit filed Tuesday that he has observed Vallejo police parked outside his home on at least four occasions since being fired last April. This SUV appeared in Matzke’s quiet cul-de-sac three days after his termination, according to Matzke and metadata associated with the image.

Three fired city of Vallejo employees who say they identified corruption by the city manager in a major development deal allege in a new lawsuit that they have suffered personal and professional consequences familiar to those faced by other city whistleblowers.

Joanna Altman served the city as an assistant to City Manager Greg Nyhoff. Slater Matzke was his special advisor. Will Morat led economic development for the city. All three were abruptly terminated last April.

In a lawsuit filed Tuesday in Solano County Superior Court, Altman, Matzke and Morat allege they are whistleblowers who were fired for raising concerns about Nyhoff’s leadership, including a development deal that Nyhoff renegotiated against the interest of the city. Their suit alleges a pattern of conduct that includes public corruption, as well as an abusive and hostile work environment in which discrimination went unchecked.

The fired employees say they have suffered further mistreatment since being fired. Matzke claims he has received anonymous threats, and has seen a Vallejo police cruiser parked outside his home. All three allege in court papers and interviews that their reputations have been harmed, their careers derailed, and their bank accounts drained during a global pandemic — all for raising concerns they believe have since been vindicated.

“When I look back at some of the things I was concerned about a year ago, and the things that I flagged for the City Council, it pales in comparison to how bad it really got, and how bad it is,” Morat said. But most troubling for Vallejo is that their treatment mirrors how other whistleblowers in the city are dealt with, the fired employees said in the lawsuit and interviews.

“You don’t expect that to ever happen in the city you’re working for,” Altman said. “Then to blow the whistle on it and get terminated — it’s jaw-dropping.”

In a statement, City Attorney Veronica Nebb said that the city had not yet seen the lawsuit.

“It is generally not our policy to comment upon pending litigation, particularly when such litigation involves personnel matters,” said Nebb, who was named city attorney in October.

However, Nebb added, at-will employees in California “may be separated from service by any public or private employer at any time, with or without cause.”

Nyhoff, who was appointed city manager in January 2018 and has a five-year contract, did not comment for this article, but has in the past publicly dismissed some allegations relating to his meetings with developers as “false claims.”

According to the lawsuit Nyhoff “engaged in graft and corruption, using his position to his benefit as he curated close relationships with land developers, particularly wealthy ones.”

Specifically, Nyhoff directed that a land-development agreement for the former Mare Island shipyard be watered down to favor the property developer at the expense of the city, the lawsuit alleges.

In addition to negotiating against the city’s interests, the lawsuit also accuses Nyhoff of presiding over a “culture of discrimination, harassment, and retaliation” inside Vallejo City Hall.

Under Nyhoff, harassment and discrimination against women and people of color was ignored or tolerated, the suit alleges. Employees who dissented were either fired or treated so poorly that they resigned.

The fired employees also accuse the Vallejo City Council of covering for Nyhoff.

They did not indicate what leverage the city manager would have on elected officials, who have the power to remove him.

In addition to alleging that Nyhoff violated state labor law that protects employees from punishment for reporting what they believe is illegal workplace conduct, the fired employees claim that they’ve suffered both harassment and defamation since complaining of Nyhoff’s alleged misdeeds.

Morat was first placed on administrative leave in February 2020, immediately after complaining that one of his subordinates was being harassed and discriminated against, the lawsuit alleges. However, Morat believes he first raised Nyhoff’s ire after he pushed back against Nyhoff’s involvement in the Mare Island land-development deal.

During this same timeframe, in late 2019 and early 2020, the Vallejo City Council met several times to discuss Nyhoff’s performance as city manager.

At the behest of the City Council, several city employees, including Altman and Matzke, were interviewed as part of an investigation into Nyhoff’s alleged conduct, including specific allegations of discrimination and harassment, according to the lawsuit.

Both Matzke and Altman say that they were compelled to participate in these interviews and that they were instructed to be truthful or face termination. They alleged specific instances of misconduct by Nyhoff and other City Hall officials, according to the suit.

Details from these interviews made their way back to Nyhoff, the complaint alleges. The day after the City Council concluded its review of Nyhoff’s conduct, on April 23, 2020, the litigants were fired — retaliation, they claim, for raising concerns and participating in the investigation.

Christopher Boucher, an outside labor attorney who was hired to oversee the investigation, told ABC 7 in December that his work both exonerated Nyhoff and led to a recommendation that Altman, Matzke, and Morat be fired for “bonafide independent reasons.”

The city has declined to identify those reasons, but has also repeatedly said that the employees could have been terminated with or without cause.

‘I’m looking at your front door’

The firings were an abrupt end to careers that appeared ascendant. Altman, Matzke and Morat were promoted repeatedly — in some cases, very quickly — before their terminations, according to their lawsuit.

Matzke was promoted from an outside consultant to special assistant to the city manager in February, just two months before he was terminated, the suit alleges.

But, the former employees said Tuesday, the way they have been treated for attempting to blow the whistle on illegal conduct mirrors the way other would-be whistleblowers have been dealt with in Vallejo.

That includes John Whitney, a former police captain who was fired in August 2019 after nearly 20 years with the department. Whitney alleges in a recent lawsuit that he was fired after bringing concerns about police misconduct to former police Chief Andrew Bidou and then to city leaders including Nyhoff.

Among Whitney’s claims are that Vallejo police leadership knew about destruction of evidence and a ritual, first reported by Open Vallejo, in which officers bend a point on their star-shaped badges to mark each person they have killed.

Senior city officials did nothing to punish the wrongdoers, Whitney said, and instead sought to cover up the burgeoning scandal.

Altman, Matzke and Morat say their warnings about Nyhoff’s weakening of the city’s position on the Mare Island development deal have similarly been vindicated.

All three have suffered personal and professional consequences following their firings, they said. Of the three, only Altman has been able to find new work in the public sector. But both her pay and benefits are lower, she said during an emotional interview Tuesday. “I wasn’t able to find an equivalent that my training and experience should get me under normal circumstances.”

Both Morat and Matzke say attempts to find other work have been unsuccessful.

“I haven’t been able to get work in over a year now,” Matzke said. “I can’t back into the public sector, or the private sector, because of the amount of damage done to my name.”

Matzke has also received emails threatening violence against him and his family. They originate from the same pseudonymous account that sent threats to this news organization over a period of several months last year, according to a review of the threatening emails by Open Vallejo. One of them said, “I’m looking at your front door.”

The account is controlled by a senior city employee, according to the lawsuit, as well as law enforcement sources and other evidence reviewed by Open Vallejo.

Since his termination, Matzke has observed a Vallejo police cruiser parked outside his home on at least four occasions, in what he believes was a not-so-subtle effort at intimidation. Although he filed reports with both the Solano County Sheriff’s Office and the Vallejo Police Department, Matzke said Vallejo police told him he “was imagining things.” When Matzke countered that he had photographs of police sitting outside his home, “they stopped responding to me.”

Altman, Matzke and Morat say they are undeterred.

“We were right to speak out even though it cost us personally and professionally,” Morat said. “It was still the right thing to do.”

Chris Roberts is an award-winning investigative reporter and a former editor and columnist at SF Weekly.