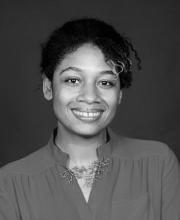 Harlo Holmes is the Director of Newsroom Digital Security at Freedom of the Press Foundation, where she helps journalists use tools to preserve their privacy and do their jobs better.

Harlo is also a media scholar, software programmer, and activist. She is a founding member of Deep Lab, a collaborative group of cyberfeminist researchers, artists, writers, engineers, and more addressing issues such as privacy, surveillance, code and art. She contributes regularly to the open source mobile security collective The Guardian Project, which creates easy to use secure apps, open-source software libraries, and customized solutions that can be used by any person looking to protect their communications and personal data from unjust intrusion, interception and monitoring.

Harlo was a Technology and Democracy Fellow at the Harvard Kennedy School’s Ash Center for Democratic Governance and Innovation in 2016–2017, where she taught best practices and tools to maximize the efficacy of Freedom of Information Act requests. In 2014, she was a Knight-Mozilla OpenNews Fellow at the New York Times.

Harlo earned her undergraduate degree from Oberlin College and studied at the New Sorbonne University. She holds a master’s degree in Media, Culture and Communication from New York University.