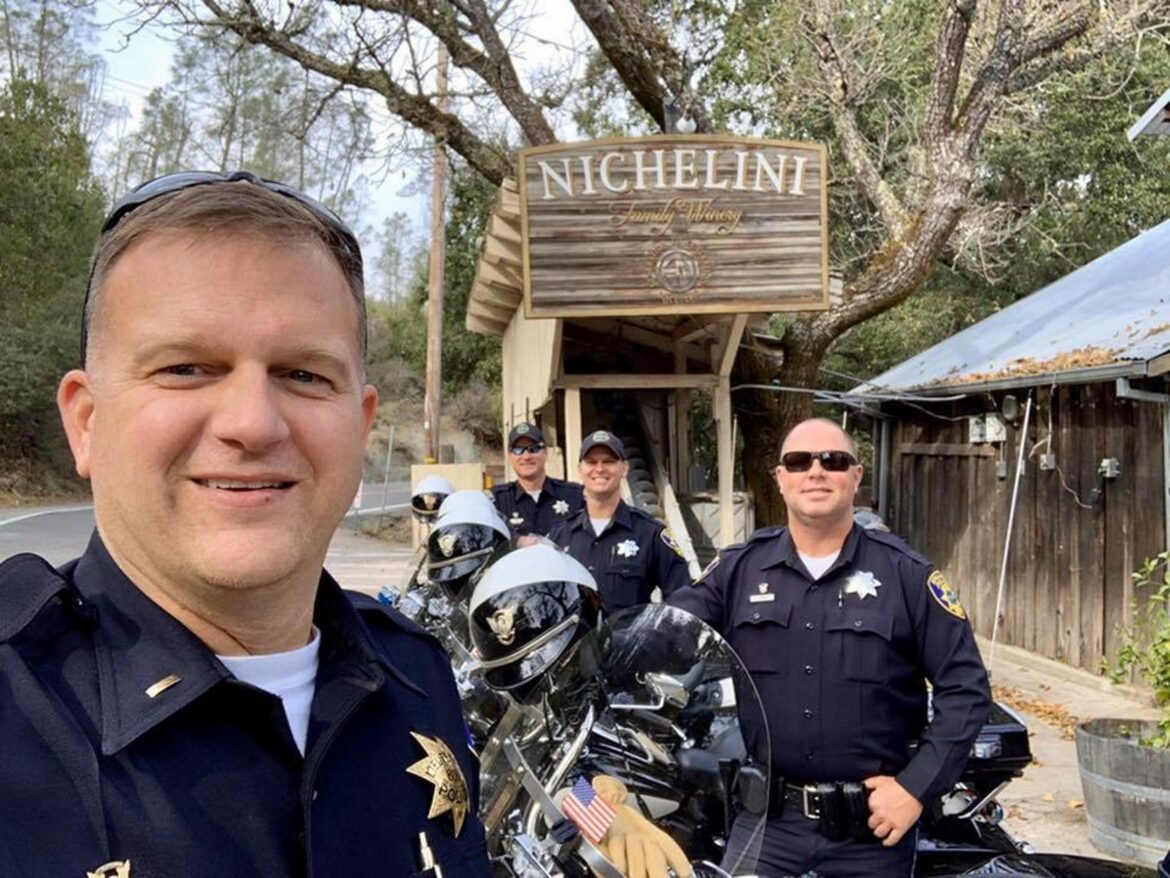 Vallejo Police Lt. Michael Nichelini takes a selfie with colleagues in front of his family’s winery in St. Helena, Calif. during a “training ride” on Nov. 14, 2019.

The combative head of Vallejo’s police union has been cleared of wrongdoing by an arbitrator, 18 months after he was fired for sending a threatening email to a reporter and other alleged misconduct, Open Vallejo has learned.

In an internal union email obtained by Open Vallejo and sent to union members Wednesday afternoon, former Lt. Michael Nichelini called the decision overturning his discipline “a win for all of us and the process.”

“The arbitrator found ‘no just cause’ for either the termination or suspension that was imposed on me,” Nichelini wrote, adding, “I don’t have all the details as this information just came from a phone call.” He closed the email with his customary sign-off: “In Unity There Is Strength.”

If reinstated, Nichelini is likely to be awarded more than a year and a half of back pay totaling hundreds of thousands of dollars.

A spokesperson for the City of Vallejo did not immediately respond to requests for comment.

“Looks like 2021 will be a little bit better not having your biased and uniformed articles printed in the newspaper that only inflame the public,” Nichelini wrote from the account [email protected] “We will warn our Georgia colleagues of your impending arrival.”

Taylor, who is Black, wrote on Twitter that he considered the email “a thinly-veiled threat.” He had recently accepted a job on the Atlanta Journal-Constitution’s investigations team, having previously covered Vallejo police, including Nichelini, while employed as a columnist for the San Francisco Chronicle. Taylor is now the managing news editor at KQED and a lecturer at the UC Berkeley Graduate School of Journalism.

Reached for comment Thursday, Taylor was unsparing in his remarks about Nichelini.

“If he is reinstated, it should raise concern from the streets of Vallejo to the attorney general’s office about how seriously the police department is taking reform,” Taylor told Open Vallejo. “While Shawny Williams, the reform-focused chief who encountered bitter opposition from Vallejo’s police union, is gone, the union president, a representation of why police reform is needed in Vallejo, appears to retain his influence over policing in the city.”

On Twitter, Taylor took issue with Nichelini’s characterization of his work.
“The VPOA never challenged a story, and I always asked for an interview,” Taylor wrote at the time.

The grounds for Nichelini’s termination also included his sharing of a photograph depicting a 1907 Vallejo police badge inscribed with a counter-clockwise swastika, his attorney Michael Rains told ABC 7 last April. Nichelini denied “advocating bias and prejudice,” Rains said, according to the report. (The symbol was in widespread use in American culture, including by Coca-Cola and the U.S. Army, prior to being co-opted by the German Nazi Party around 1920.)

At the time of his termination, Nichelini was facing other allegations of wrongdoing, including that he covertly filmed and sought to intimidate local civil rights attorney Melissa Nold.

Claiming that the discipline he faced for these incidents violated his civil rights, Nichelini filed a $10 million lawsuit against the city last March alleging “a campaign of harassment, intimidation, and retaliation” by city officials, including former Police Chief Shawny Williams, who resigned last month.

Williams, the first Black police chief in the department’s 122-year history, himself received an alarming anonymous communication shortly before he stepped down, sources said. Williams could not be immediately reached for comment. The sources who spoke with Open Vallejo did so on condition of anonymity because they were not authorized to discuss internal police or government matters.

Nichelini has courted controversy since being hired by his father, then-Police Chief Robert Nichelini, in 2006. The younger Nichelini had faced discipline as an Oakland police officer in the previous year, according to reporting by the East Bay Times. It was the second time in a matter of months that the city’s police oversight board found that Michael Nichelini engaged in excessive force.

“He has a perfect record,” Robert Nichelini told the Times-Herald at the time. “His background is clean.”

Nichelini was also named in a lawsuit alleging that officers used excessive force to disperse a peaceful demonstration against the Iraq War in 2003. The plaintiffs alleged that Nichelini struck a woman with his motorcycle. To settle the lawsuit, Oakland agreed to a court-mandated overhaul of its crowd-control policy, giving significant protections to journalists who cover police actions. California Governor Gavin Newsom signed a state law incorporating many of those same protections last year.

It remains to be seen whether Interim Police Chief Jason Ta will attempt to override the arbitrator’s decision or welcome Nichelini back among Vallejo’s ranks.

This article has been updated to incorporate comment from Otis R. Taylor, Jr.