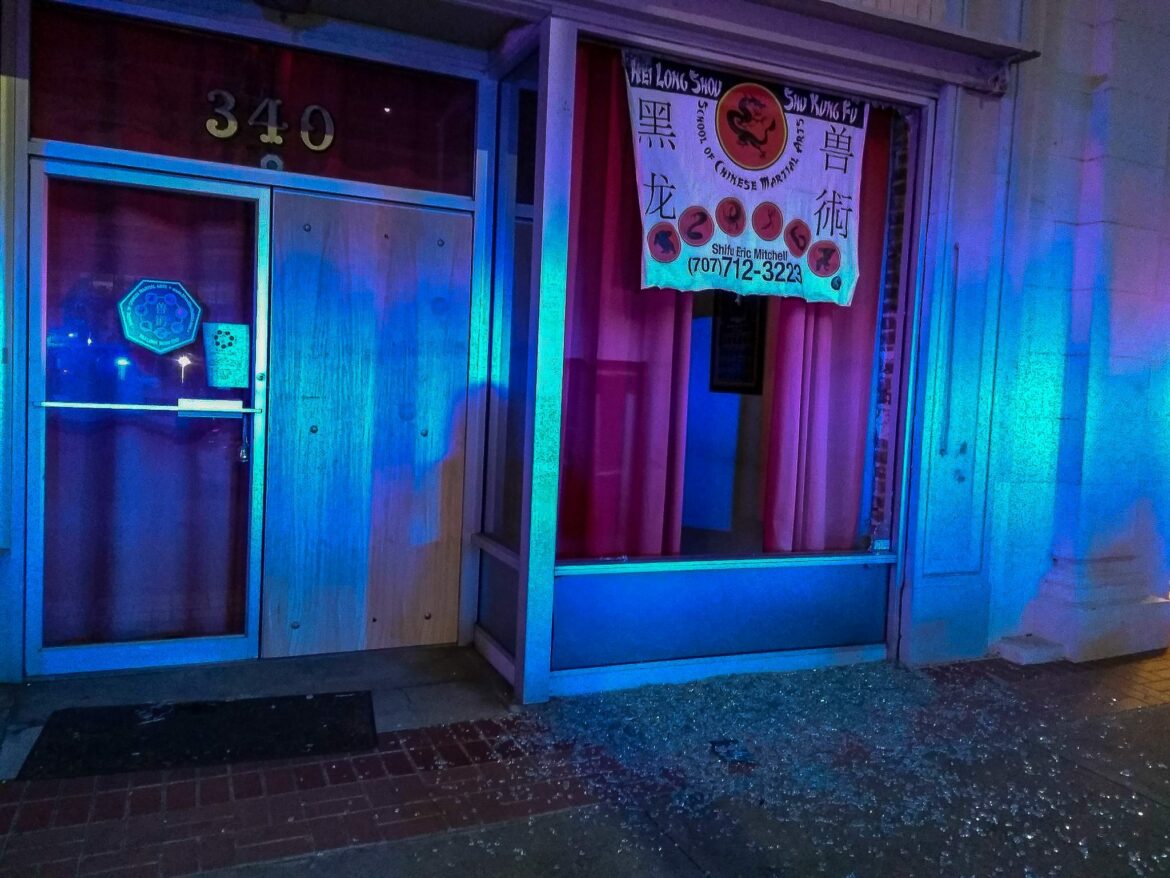 Glass broken by a stray bullet covers the sidewalk following a shooting in downtown Vallejo, Calif. on June 6, 2021. The shooting started at a graduation party, according to bystanders. One woman was taken to the hospital with injuries that were not considered life threatening.

On the evening of June 6, a friend texted me snapshots of police cars and yellow tape in front of a building I help manage in downtown Vallejo. “Shooting,” it read. “The shooters went into some of the buildings.”

“There is glass all over the sidewalk now,” my friend added.

I rushed downtown to secure our building. The windows were intact, but our neighbor’s big storefront window was shattered. A bystander told me the shooting started at a graduation party, and that the violence had spread into the street. One woman was taken to a hospital with injuries that were not life threatening.

Although I was glad to hear there had been no fatalities, I was shaken by the news.

Nine days later, the Vallejo Chamber of Commerce invited me to a virtual meeting on public safety in downtown Vallejo co-hosted by the Chamber and the Vallejo Police Department. The invitation read, “In discussions with VPD regarding a recent increase in crime downtown, including a shooting, we have asked VPD to provide an update on things they are doing, and the things that businesses can do to help deter crime.”

When the meeting began, I entered a question that had been haunting me into the chat: what can be done to stop kids from thinking it’s a good idea to bring a gun to a graduation party?

An officer responded that my question was better suited for a meeting regarding Operation PEACE — short for Predictive Enforcement and Community Engagement — an initiative supported by Vallejo Police Chief Shawny Williams.

It soon became clear that the sole focus of the meeting was to sell Vallejo business owners proprietary automated license plate readers, or ALPRs, made by an Atlanta-based company called Flock Safety. A sales rep cheerfully discussed the company’s surveillance products alongside a polished presentation. The officers present occasionally interjected to fawn over the technology’s promise to stop crime.

Williams encouraged business owners to subsidize the department’s surveillance efforts by leasing the cameras, and then sharing the data with police. He claimed that ALPRs will help officers identify catalytic converter thieves, pimps and johns, and stolen cars. He said nothing about how these cameras might have prevented the June 6 shooting, or the tragically large number of shootings like it. After all, I wondered, if a young person is willing to walk into a party and start firing, what level of deterrence can any technology really provide?

On the surface, ALPRs do have appeal. Several friends have had their catalytic converters stolen, and I would love to see more accountability for crimes like illegal dumping. But the technology also presents significant privacy concerns. And at the end of the day I am much more concerned about the bullets like those that struck my neighbor’s window, and who they might hit, than the broken windows theory of policing, which criminalizes low-level quality-of-life crimes.

So, what can be done?

I decided to seek answers from the Operation PEACE section of the Vallejo Police Department’s website. It lists four areas of focus: Redeployment; County, State & Federal Partnerships; Technology Improvements; and Community Engagement. Of these, only portions of the Community Engagement section include prevention programs, and I found no details about them on the department’s website. Moreover, while a search of the department’s news archive for “Operation PEACE” revealed several press releases about firearms that had been confiscated during traffic stops, searches for “Youth Outreach” and “Courageous Conversations” lead only to a heavily-scripted presentation hosted by the department.

Two weeks after the Chamber of Commerce meeting, on July 1, the Vallejo Police Department published a press release, “Vallejo PD Calls for More Cameras after Two Shootings in a Two-Hour Period, Leaving One Deceased.” As with the city’s high rate of civil rights settlements, surveillance technologies appear to be an expensive way of propping up a police department that has proved resistant to reform. This is money that could go toward a universal basic income pilot project, which proved successful in cities like Stockton; high-speed Internet access to bridge the digital divide; investment in a new youth recreation center; or other community-focused projects that could ensure equity of opportunity in our city.

As a community, it is our responsibility to choose where our tax dollars go. We can invest in ensuring our young people have the resources to succeed. Or we can ignore them and waste our money further engorging a police force that has already shown itself to be less than trustworthy. Our immediate fear of crime is a strong motivator, but high-tech toys for police only address a symptom of deeper social problems. If we refuse to address the conditions that give rise to violence, the cycle will continue.

Op-eds are contributed by people from outside this news organization. They represent the views of the author.