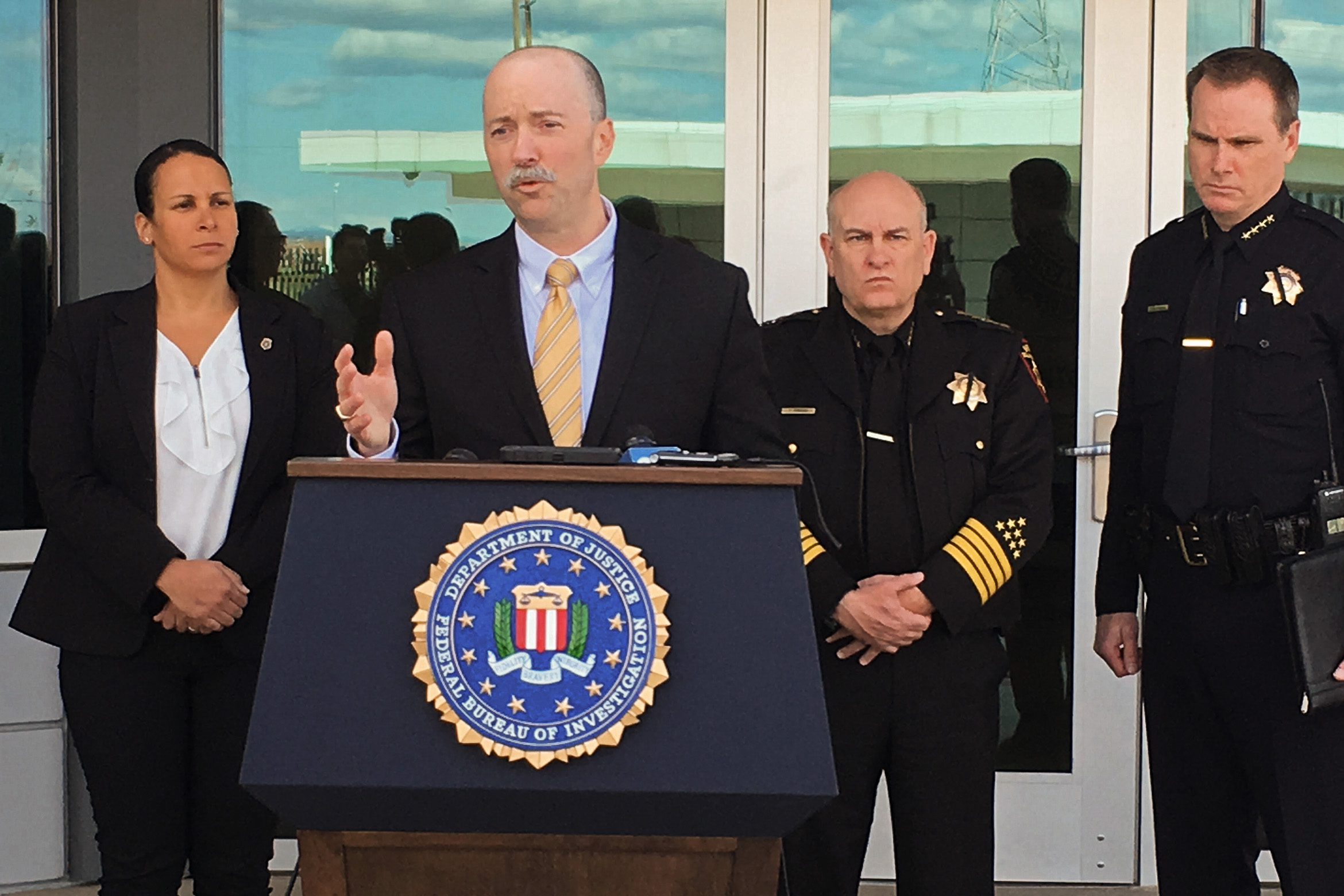 FBI Special Agent in Charge Sean Ragan speaks to reporters at a press conference in Fairfield, Calif. in 2018. Solano County Sheriff Tom Ferrara, second from right, has recently sought to downplay concerns about possible far-right extremism in his agency following an investigation by Open Vallejo.

The FBI called into question Solano Sheriff Tom Ferrara’s claim that agents cleared members of his department of links to a far-right extremist group as the sheriff seeks to minimize fallout from revelations that several deputies promoted imagery associated with the Three Percenter movement on social media.

There is no indication the deputies committed a crime through their posts. However, federal prosecutors have linked Three Percenters, a loose-knit anti-government militia, to the Jan. 6 attack on the U.S. Capitol and other acts of domestic terrorism across the country. Following publication of the article, local, state and federal officials called for an investigation into the extent of extremist support in the sheriff’s office.

Ferrara indicated he would not formally investigate the deputies’ conduct. He instead has launched what appears to be a political defense in recent weeks, sending letters to progressive organizations suggesting federal investigators had done so for him.

“I have consulted with the FBI, who confirmed none of my employees are members of any extremist organizations,” Ferrara wrote in a March 22 letter to the Solano County Democratic Central Committee. He repeated the claim in an April 12 letter to Benicia Black Lives Matter. The sheriff’s office employs more than 500 people.

According to emails obtained by Open Vallejo, on Feb. 17, Ferrara forwarded a request for comment from Open Vallejo to Sean Ragan, Special Agent in Charge of the FBI’s Sacramento field office, who called Ferrara to discuss the situation. Ferrara did not respond to questions about the substance of his call with Ragan.

The FBI appeared to cast doubt on Ferrara’s version of events. Reached for comment about the claims contained in Ferrara’s letters, FBI spokesperson Gina Swankie said the agency does not investigate or track membership in domestic political groups.

“Investigations by the [FBI] focus solely on alleged criminal activity of individuals,” Swankie said in a statement to Open Vallejo. “A group which may espouse domestic extremist ideology is not illegal in and of itself, no matter how offensive their views may be, and membership in any group is neither tracked nor is sufficient basis for an FBI investigation,” she said.

Veterans of the FBI cast further doubt on Ferrara’s claims, saying it is unlikely the agency would have told the sheriff that his employees are not members of extremist organizations.

Michael German, a fellow at the Brennan Center for Justice and former FBI agent who studies domestic terrorism, said the agency’s focus is on investigating violations of federal law.

“It would not be proper for the FBI to provide the information to a local law enforcement officer simply so that it can be passed on to the media for public release,” German said.

John Bennett, former Special Agent in Charge of the FBI’s San Francisco field office, said the FBI would not investigate members of the sheriff’s office unless it believed that there had been a violation of federal law. While the FBI might not alert department leadership to such an investigation under certain circumstances, it is likely the head of an agency would know if the FBI had an open inquiry into anyone in their department, he said.

“A disciplined and honorable leader of an agency would not make a public statement contrary to what they know is the truth about the status of an FBI inquiry,” Bennett said. “If the Bureau comes out later with contrary statements, that department and its leadership will lose credibility.”

In his letter to Benicia Black Lives Matter Ferrara also said photographs referenced in Open Vallejo’s report that depicted firearms and Three Percenter symbolism were “taken over four years ago.”

But many of the posts were much more recent than that. Sgt. Roy Stockton, now a Vacaville City Councilmember, shared Three Percenter posts on Instagram as recently as 2019 and had Three Percenter items on his online leatherwork store through mid-April. Deputy Dale Matsuoka, the sheriff’s homeless outreach coordinator, changed his Facebook profile picture to a Three Percenter emblem just after the 2020 election. It remained on his public profile after the article was published.

Journalist Katie Way discovered this month that a fourth sheriff’s employee, SWAT team member Sgt. Ty Pierce, also displayed Three Percenter symbols on his Instagram page. Pierce, who has since made his Instagram private, did not respond to detailed written questions about his posts.

Ferrara’s letter went on to say that since the Jan. 6 riots at the Capitol, he has educated himself on Three Percenter ideology and trained his staff in extremism, claiming without evidence that the movement has evolved. “We learned that the ideology of the III percenters has changed since the posts were first made,” Ferrara wrote.

Three Percenters have called for violent resistance to the federal government and anticipated a second civil war since the movement’s inception. Researchers have tracked the group’s origins to the Sipsey Streets Irregulars blog. In its second post in 2008, author Mike Vanderboegh, a longtime militia member from Alabama, referred to the recent election of President Barack Obama and anticipated he would enact tougher gun control laws.

“There are American gun owners, the Three Percent, who will resist these laws,” Vanderboegh wrote. “Three Percenters’ resistance will provoke government violence to compel their obeisance. The administration will kick in the doors of American gun owners to achieve this allegedly ‘reasonable’ objective. Shots will be fired, and the next American civil war will be off and running.”

Since then, Three Percenter groups have splintered into a network of loosely affiliated individuals and organizations across the country. Some Three Percenter groups claim to be represented in every state. They have ties to other far right movements like the Oath Keepers and Boogaloo and have provided security for white nationalists, such as during the “Unite the Right” rally in Charlottesville in 2017 where a counter-protester was killed.

Months before Sgt. Cully Pratt posted a photo of a rifle rack with the Three Percenter logo he made for Stockton in 2016, Three Percenter groups were involved in an armed standoff with federal authorities in Oregon that left a man dead.

Benicia Black Lives Matter co-founder Brandon Greene said in an interview that if the FBI investigated and found the deputies had no involvement in extremist groups, then that investigation should be made public.  “We don’t know what it entails, what the methodology was,” Greene said.

“It would be strange to me if any sort of FBI investigation happened so rapidly,” Greene said.

Greene and other activists have pushed for the county Board of Supervisors to discuss the possibility of extremist ideologies in the sheriff’s office and for the board to exercise its authority under AB 1185, a new law that took effect this year, to establish a community oversight board with the power to oversee the sheriff’s office.

“The only person we have heard from is [Supervisor] Monica Brown and only to say they have no power,” Greene said. “We asked for very specific demands in our letter and there has been silence.”

Brown, who represents Benicia and part of Vallejo, said last month that she found the extremist groups described in Open Vallejo’s original investigation “deeply disturbing.” But she told Bay City News last week that she trusts the FBI. “I also trust Tom, he keeps tight reins on his employees,” she said.

In a statement to Open Vallejo, Brown reiterated that she could not comment on specific county employees and that the sheriff is an independent elected official.

She said her statement to Bay City News “was based on the understanding that the FBI investigated and found nothing” but that the FBI’s statement in response “calls that into question.”

“I will have to evaluate what options are available,” Brown said.