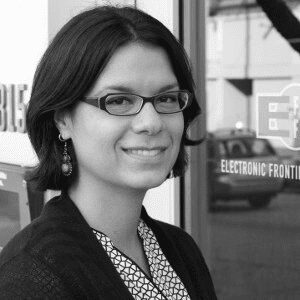 Sophia Cope is a Senior Staff Attorney on the Electronic Frontier Foundation’s civil liberties team, working on a variety of free speech and privacy issues. She has been a civil liberties attorney for 15 years and has experience in both litigation and policy advocacy. Her writing has appeared in the New York Times, Guardian, Slate, and Huffington Post.

Prior to joining EFF, Sophia spent eight years in Washington, DC. She worked at the Newspaper Association of America (now, the News Media Alliance) on freedom of the press and digital media issues, with a focus on protecting journalists’ confidential sources. She advocated for a federal shield law, a warrant-for-content requirement under the Electronic Communications Privacy Act, and improvements to the Freedom of Information Act. She also wrote a chapter for a book published by the American Bar Association entitled “Whistleblowers, Leaks and the Media: The First Amendment and National Security” and spoke out against NSA surveillance.

Prior to NAA, Sophia worked at the Center for Democracy & Technology on a variety of civil liberties and human rights issues related to the Internet and technology, including the regulation of content on the Internet and broadcast television, and the privacy implications of government identification programs; she also worked on the development and launch of the Global Network Initiative.

Before moving to Washington, Sophia litigated at the First Amendment Project in Oakland, California, where she defended an environmental activist against a frivolous lawsuit and a video journalist against a federal subpoena seeking his unpublished footage; she also counseled clients on how to obtain greater access to public records and public meetings.

Sophia was an adjunct professor of media law for nearly four years, teaching Washington-area undergraduate communication and journalism students. She is a graduate of Santa Clara University and University of California, Hastings College of the Law. She is proud to be a native Californian.